NEW BOOK TO LAUNCH IN MAY!

Click here to GET YOUR COPY AT PRE-SALE PRICE!

Coming of Age in War-Torn Guam:

We have just successfully ran a Kickstarter Campaign to raise funds to print a hardbound copy of "Coming of Age in War-Torn Guam: The Memoirs of Justo Torre Leon Guerrero" in order to donate copies of the book to middle, high school and college libraries as well as nonprofit organizations on the island of Guam.

This book is a valuable primary source for information about life for a young boy coming of age during the Japanese occupation of Guam - 1941-1944. In addition to Justo's story, the book contains a collection of historical photos and illustrations, 12 beautiful original artistic renderings by Guam artist Judy Selk Flores. Book designed by Ron Castro.

As with many WWII survivors, Justo never spoke of his experiences during the war until late in life.  With prompting from his daughter, he eventually began to tell the stories when he moved back to Guam in 2004.

He experienced much during this period - the destruction of his home, the exodus to the family ranch from Hagåtña, and then forced labor for the Japanese. He also relays his experiences attending Japanese school and how he witnessed the crash landing of an American plane  near his family ranch. His family paid dearly for assisting the pilot - an uncle was beheaded along with the pilot and his older brother was tortured.  He luckily escaped harm – probably because he looked younger than his age.  He  also relays his experiences with the  forced march to the concentration camp in Manenggon and  his first sight of the American Marines who liberated them.

It soon became apparent that many of his life choices were made based on his experiences during the war.  He became a career military man joining the Air Force 7 years after the war.

This book would be an asset to any middle to high school or college history curriculum as well as anyone interested in learning about the WWII history of the island of Guam.

The hardbound edition is in the final production stage and once we raise the money, it will be sent to the printer. We are hoping to raise $5600.00  in order to print  1000 copies so that students, teachers and those interested in Guam’s history can benefit from this first hand account of WWII. We hope you will support our efforts to make this a reality. Please make your donation today as we need to meet our goal by the deadline in order to receive any money. Thank you for your attention. 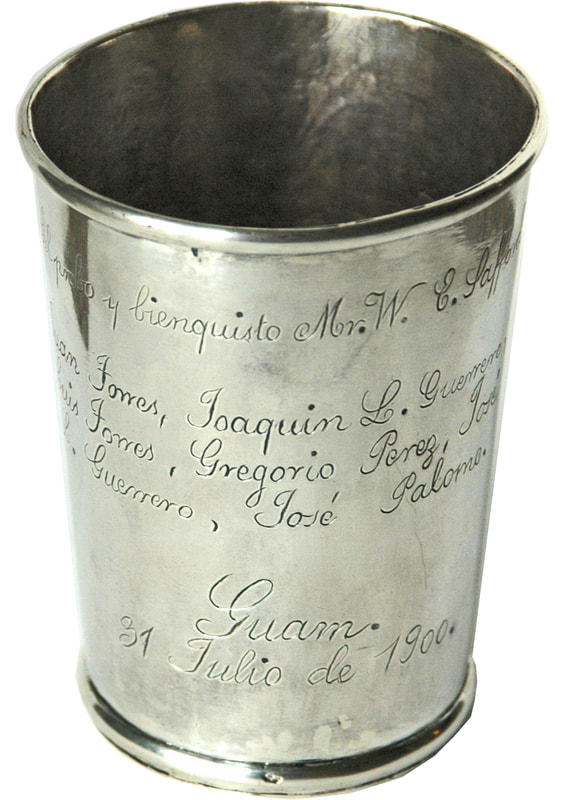 Agaña Heights - 2 April 2020.  A silver cup, made by the Hagåtña village silversmith in 1900, has been donated to Guam by the descendants of William Edwin Safford. Safford was a USN lieutenant assigned to Guam shortly after the Spanish American war. He was appointed as the aide to the first American governor of Guam, Richard Leary, but functioned more like the governor than an aide.

The cup was donated by the surviving grandchildren of Safford, namely: Sister Clare Pratt, RSCJ; Patricia Moriarty, Lucinda Pratt Pearlman and Mary Brandenburg and will be donated on behalf of the family to the Guam Museum.

In a letter to Jillette Leon-Guerrero, President of Guamology Inc., and a MARC research associate at the University of Guam, granddaughter Mary Brandenburg, said “My sisters and I are delighted for this cup to find ‘it’s forever home’, where it rightfully belongs.”

Leon-Guerrero received the cup from the family just this week.

Dominica Tolentino, director of the Guam Museum said, “The historic value of this gift to William Safford from the people of Guam cannot be understated. It represents an important turning point in Guam’s history and the beginning of our formal relationship with the United States. But it also represents the very human experience of friendship and respect that sometimes gets overlooked in the stories of change, colonialism and the complex interactions between two different cultures.

“Guam and its people were not just simply new subjects of the United States. Unlike the first naval governor of Guam he served under, I believe Safford saw the island as beautiful and the culture and traditions of the time as worthy of admiration and protection. Safford’s family also understood the value of this cup and found it fitting it should be returned to Guam. Jillette Leon Guerrero not only brought Safford’s story back into the consciousness of the people of Guam, she has been instrumental in bringing this important piece of history back to our island for generations to learn from and appreciate,” said Tolentino.

Leon-Guerrero first learned of Safford while she was a student at the University of Guam in the 1980s. She said, “I was struck by this Renaissance man who clearly had an affection for the people of Guam. As one who loves historical research, I thought that people should know about this man.”

In 2009, Guamology Inc. published The Useful Plants of Guam (2009) and then in 2016 published, A Year on the Island of Guam, a book that won an international award (IPPY Awards) for the best nonfiction of 2018 in the Australia/New Zealand region. While working on this book she reached out to the family that she had located through her skills as a genealogical researcher. It was then that she asked about the possibility of donating the cup to Guam. She was told that the family would have to consider it. She had formed a strong relationship with the family over the years but it wasn’t until she wrote to Sister Clare Pratt recently that she got this welcome news:  “I have been in touch with my 3 sisters and we unanimously and enthusiastically want to GIVE our Grandfather’s silver cup to the Guam Museum… This has been a long time coming and it makes our family very happy.”

US Naval Gov. Leary did not want to be bothered with issues related to the inhabitants of the island, and tasked Safford with dealing with them.  Because of his background as a linguist, scientist and diplomat it was a perfect fit. During his short tenure in Guam he recorded the history of the island from documents in the Spanish archives, wrote the first known Chamorro-English grammar and conducted a survey of plants and wildlife on the island resulting in his published work, The Useful Plants of Guam, originally published in 1905 by the Smithsonian Institute.

During his short sojourn in Guam he was able to forge close relationships with the leading citizens of Guam and most especially, Padre Jose Bernardo Palomo, the first Chamorro priest.

The cup was presented to Safford at his home in Hagåtña by several leading citizens. A speech was made by one of them that relayed the appreciation of the work that he had done on behalf of the people of Guam and “that they felt thankful above all things for the titles to their land which I had secured to them and their children.” They also said:

“In sending you this farewell greeting we wish you with all our soul a happy voyage and prompt arrival at your lares, where more sacred affections await you; we also, send you the expression of affection of this people, who heaps upon you it benediction and respects.”


The cup contains the inscription:

For more information contact: Jillette Leon-Guerrero at 687-3167 or email jillette@guamology.com

A Year on the Island of Guam wins Gold Medal! 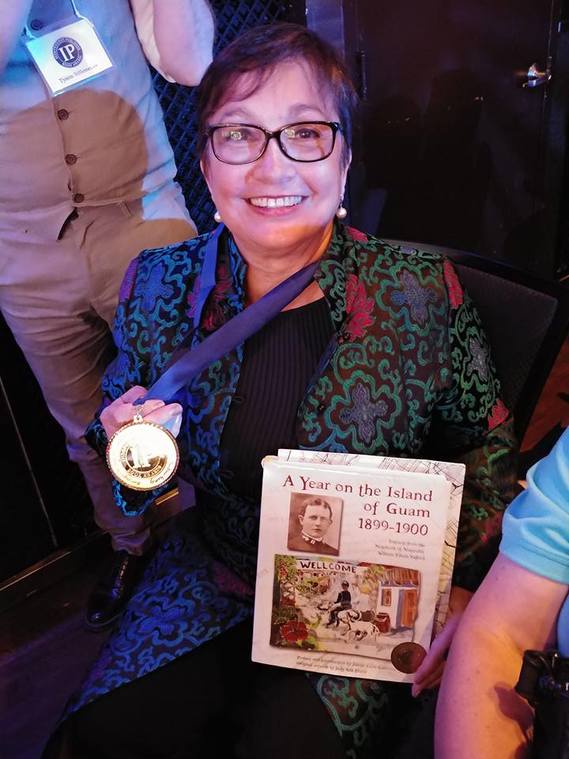 Guamology Publishing is pleased to announce that its latest book, A Year on the Island of Guam has won the Gold Medal for the Best non-fiction book for the Australia/New Zealand region at this year’s IPPY Awards.

The Independent Publisher Book Awards, also known as the IPPY Awards, is an annual book awards contest conducted to honor the year's best independently published titles from around the world.

The Awards were conceived in 1996 as a broad-based, unaffiliated awards program open to all members of the independent publishing industry, and are open to independent authors and publishers worldwide who produce books intended for an English speaking audience.
The awards are intended to bring increased recognition to the thousands of exemplary independent, university, and self-published titles published each year.

The IPPY Awards reward those who exhibit the courage, innovation, and creativity to bring about change in the world of publishing. Independent spirit and expertise comes from publishers of all sizes and budgets and books are judged with that in mind. Gold, silver and bronze medals are awarded to winners in national subject categories, regional categories, and e-book categories.

Jillette Leon Guerrero, President of Guamology Publishing said, “We am honored to receive this award that we share with all of those who supported the creation and printing of this book. A lot of hard work went into its creation and without the supportive community of Guam, this wouldn’t have been possible. It is humbling to see Guam listed along with winners from 41 U.S. States, the District of Columbia, 6 Canadian provinces and 12 overseas countries.

The book is available at the Guam Museum, Bestseller bookstores, Faith bookstore and online at http://www.guamologyinc.com/a-year-on-the-island-of-guam-1899-1900.html.
For more information, contact Jillette Leon-Guerrero via email at jillette@guamology.com or by phone at 671 687-3167.
We have big  plans for 2018! We are hoping to publish two new books and increase our reach via the Internet.  Currently we are applying for grants and soliciting supporters to help with the publication of two new books:

1. The Mariana Islands: Notes compiled by W.E. Safford. This is a valuable resource for researchers. It has never been published and contains the notes that Safford took when reading through the Spanish archives that were in Agaña [Hagåtña] in 1899. These archives were sent to the Library of Congress in Washington D.C. where they sat until the Micronesian Area Research Center [MARC] was established. Marjorie Driver, the curator of the Spanish collection at MARC and one of the founders of MARC said that only a small portion of the original documents sent to the Library of Congress survived due to moisture and time. Safford, at the time he viewed them in 1899,  said many of the documents were already deteriorating because of insects and climate. We plan to first transcribe his notes as written including his handwritten notes and make this available to researchers and students. We then plan to publish an edited hardbound version including annotations, and select images of the original documents. We are currently seeking funds for the transcription of the manuscript which is close to 500 pages long.

2. Tasting Guam Through Our Cuisine: A Culinary Journey Through Guam's History. This is the second in the "Guam Through Our..." series. The first book, "Seeing Guam Through Our Eyes: Prose, Poetry &  Imagery Celebrating a Sense of Place," remains one of our best sellers. Our stock is now down to about 30 copies and we do not have plans to reprint. So we felt this would be a good time to publish our 2nd volume in the series. This book is envisioned to tell the story of Guam's history through our food. Starting in ancient Guam through the new trend for fusion foods. This book will also contain recipes of our most iconic dishes. We hope to fund this effort through a Kickstarter campaign.

We also hope to expand our research services which are expanding everyday. Each project contributes to our growing knowledge of the genealogy of Guam families.  Our latest effort, The Guam Genealogist hopes to offer insight and tools to help the researcher searching for their roots in Guam. To date we have done research on some lines of the following Guam families: Acosta, Ada, Angoco,
Borja, Cruz, Fejerang, Gogue, Leon Guerrero, Palomo, Pangelinan, Perez, Ramirez, Rojas, Taitano, Torres. Each of these line include other extended families as well.

GIVE THE GIFT OF KNOWLEDGE TO YOUR FAVORITE
​GUAMOPHILE OR HISTORY LOVER!

A Year on the Island of Guam is  a great gift!

A Year on the Island of Guam trailer from Jillette Leon-Guerrero on Vimeo. 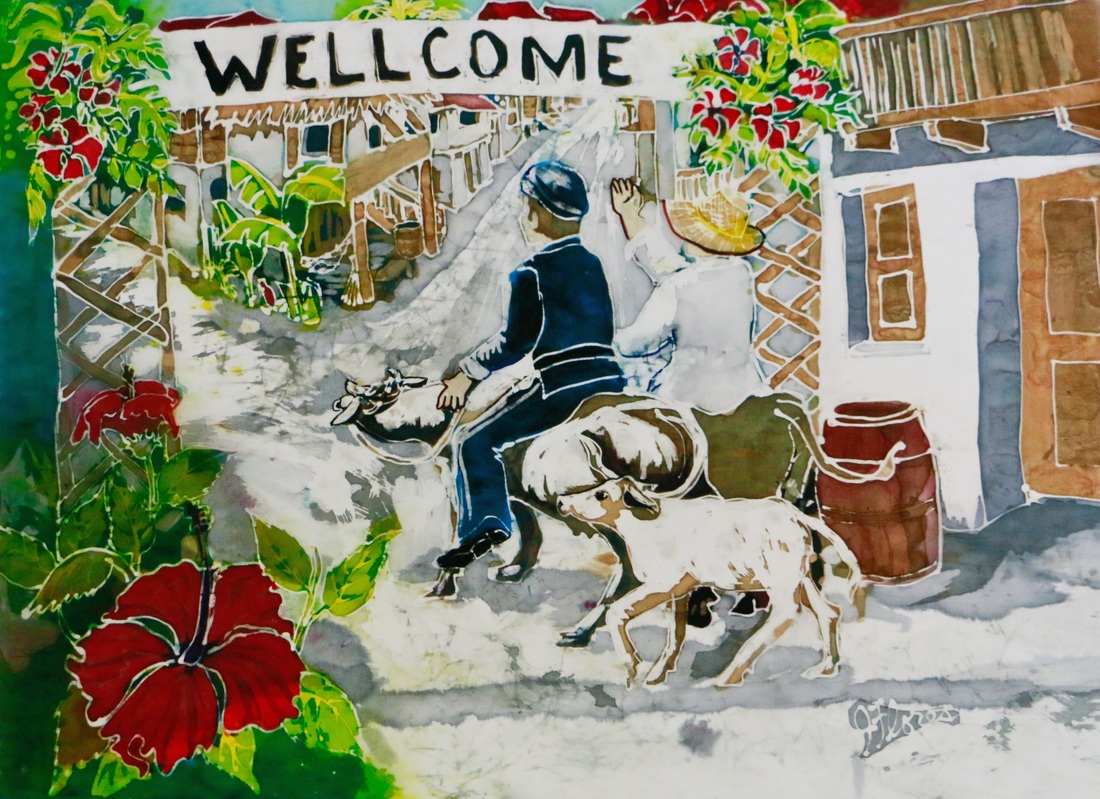